Faithful to the Original: Comparing Sherlock and Sherlock Holmes

(This piece has also been published in Proceedings of the Pondicherry Lodge, Vol 1: Issue 1. You can read that version on scribd)

I meant to write this a while ago, when the second season of the BBC TV show Sherlock came out, right after Guy Ritchie's Sherlock Holmes: A Game of Shadows. But well, better late than never.

So this question often comes up in my Shakespearean Afterlives course. (Don't worry, this post isn't about Shakespeare!) What does it mean for an afterlife, or a contemporary work that derives from some past work, to be faithful to the original source? Film and television has had a revival of interest in Sherlock Holmes in the past few years. To be honest, Sir Arthur Conan Doyle's Holmes has never quite been out of public gaze (see the numerous Sherlock Holmes adaptations over the years), but a revival of interest for the mainstream and big-budget media is recent. In particular, Guy Ritchie came out with his interpretation of Sherlock as a spunky, funny, action-packed hero, played by the inimitable Robert Downey Jr, fighting villains and saving the world in the 1890s. And then there is the BBC TV series Steven Moffat and Mark Gatiss that has received accolades from fans and critics alike. Benedict Cumberbatch plays a savant like Sherlock who is quick to embrace gadgets and modern technology - anything that can help him get closer to catching the bad guys.So which of the two works is closer to the revered and canonized Doyle version of Sherlock Holmes?

Ritchie's Holmes lives in Doyle's times. The horse-drawn carriages, old-fashioned clothes and hats and the sepia tones paint the picture of Doyle's London - surprisingly similar to what I imagined the setting to be when I read the short stories. Moffat's Sherlock, on the other hand, lives in the fast, upbeat London of 2012. The characters travel in taxis, wear jeans talk on their iPhones - more of a setting for Doctor Who than Sherlock Holmes. However, recall that when Doyle wrote his Sherlock Holmes stories, he did not intend it to be a historical piece or a costume drama. Doyle's Holmes is based not in the past, but in the present, and is in fact shown to be a man of science, gleefully using any new invention or discovery that may help him solve a case, including the recently discovered fingerprints, in a story whose title I don't remember at the moment. Incidentally, this is picked up by both Ritchie - with his Sherlock shown driving the Ford Model T in a scene - and Moffat - with his Sherlock using SMS, GPS navigation and any other technology that can help. However, while forensics might have seemed cutting edge to the readers of 1890, Holmes driving the Model T is merely a funny scene in Game of Shadows. The horse-drawn carriages are seen as quaint and cute in 2012; they were a way of life in 1890 just like GPS and mobile phones are in 2012. The 2012 audience reaction to Moffat's Sherlock, then is perhaps closer to what the 1890 audience reaction to Doyle might have been.

Note, however, that the modern reader (you and me) also reads Sir Arthur Conan Doyle. The charm of the old that the book presents for us is perhaps robbed in the Moffat and Gatiss version. Also, not all plot elements can work as well in a new setting. The photograph in A Scandal in Bohemia becomes a cellphone in A Scandal in Belgravia on the BBC show, since a digital photograph is so much easier to duplicate than a physical photograph of the 1890s. The change in the plot was done smoothly and brilliantly, in my opinion, but the fact that a change was required itself says that the plot wasn't entirely faithful to Doyle. Or perhaps, since it is merely changing the plot to fit naturally into the contemporary setting, one could argue that it is in fact a faithful adaptation. 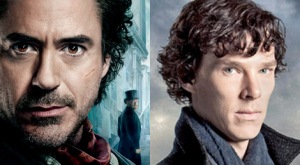 Coming to the characters, both Cumberbatch and Downey Jr. play the same role - the role of Sir Arthur Conan Doyle's Sherlock Holmes. The character portrayed, however, is entirely different for both. Robert Downey Jr's Sherlock is an eccentric detective, clever, but ever ready to jump into a brawl. "Holmes is such a weirdo", commented Downey Jr in an interview with the BBC once, and a weirdo is exactly what his Bohemian, comic Sherlock is. Comic is exactly what the Cumberbatch Sherlock is not. While he has his eccentricities, they tend to accentuate the intensity of the character rather than his funny side. The Bohemian Holmes is very much from Doyle's text, but making him a comic character is taking it too far, in my opinion. While I thoroughly enjoyed watching The Game of Shadows, Downey doesn't quite remind me of the short stories that I read so fondly as a child. Benedict Cumberbatch does. Though he uses nicotine patches instead of his pipe and lives in 2012 instead of 1890, he is in essence the Sherlock out of the pages of Arthur Conan Doyle's books. 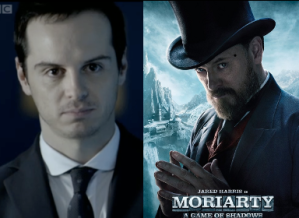 Moriarty features only twice in Sir Arthur Conan Doyle's work. Sherlock Holmes's respect and fear for him, however, make him a formidable opponent, and is often shown as an arch-enemy by contemporary works. Jared Harris plays the Moriarty of the Doyle books in The Game of Shadows. The master criminal, the mathematical genius - complete with a beard. Jim Moriarty of the BBC series, played by Andrew Scott is markedly different. He isn't a professor, for one. "Moriarty is usually a rather dull, rather posh villain so we thought someone who was genuinely properly frightening. Someone who's an absolute psycho", Steven Moffat said, in an interview for The Guardian. As in the books, Jim Moriarty commands absolute power in the criminal underworld. An unhinged genius with infinite power - Scott's Moriarty is truly frightening. Perhaps he is a more relevant villain in 2012. But then, Jared Harris's Moriarty is fairly frightening as well. Both Harris and Scott play formidable opponents to their respective Sherlocks, and are probably as clever as him. That, I believe, is the essence of Arthur Conan Doyle's Moriarty, which both characters capture well.

Perhaps faithfulness to the original isn't a very relevant question. Indeed, I tremendously enjoyed watching both the movies and the TV show, irrespective of the liberties they take with the canonized text. Nonetheless, the differences are interesting to compare and contrast the differences between the three media(book, television and cinema) and the differences between Hollywood and British television. What do you think of the two versions? Which Sherlock did you like better? Which Moriarty did you like more? What about the two Watsons? Let's discuss this in the comments below.